Two days ago, on Wednesday morning, we left the Polish station in Hornsund with one eye crying and one eye laughing.

Crying because it was sad to leave behind civilisation , laughing because we were looking forward to continue our trip.
Only that now, the route is not as straight forward as it was the last two weeks.
Especially because the ice conditions in Hornsund are pretty bad this year.

At first we decided to try to go along the shore of Hornsund in order to cross it further East.
Therefore we crossed Hansbreen and walked down a small narrow gully or canyon to the next bay. 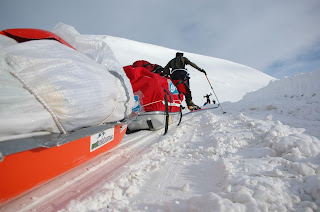 At the end of the gully we had to drag our more heavily loaded pulkas up on about a 10 meters snow drift and after some trying we figured out that the easiest way was to pull altogether on each pulka one by one.
The sea ice in the Bay was about 20 cm thick consisting of small floats frozen together.
A bit of a discussion started whether we could cross it with pulkas. But this was solved in the morning as the ice broke up over the night and there was no way to cross it now. 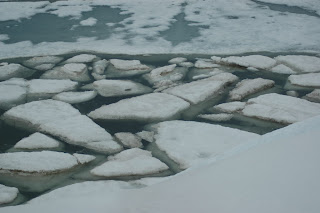 So Svalbard showed us again that the nature is the one who knows up here and if it doesn’t want us to go off that way, we have to turn around and search for another route.

That’s why we are back on Hansbreen now once more, planning to go East on the glaciers until we hit the route that we planned to go, back from the South cape where is a food depot.
So we will try to reach the South Cape this way.

But not only the route, but the weather is also unpredictable. Today we decided to stay in camp since the temperature grows above zero and it started to rain!

But after all, even with having all these problems to face, I am very happy to be back on the skis and going back to the tent after two days in ”civilisation” feels like coming home!

PS : Ulli invites everybody to his birthday party on the 26th of April. The location is to be found from our tracer. Birthday presents are welcome only if they are digestible or eatable.
Posted by Lucas at 23:52