Where is the Arctic? 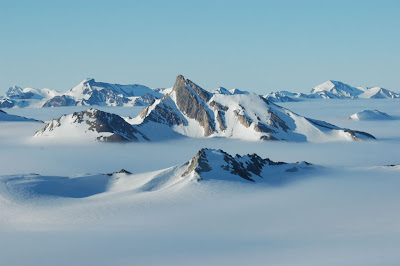 In a few hours, I'm heading up to the Arctic. Going from London, via Oslo, you reach Longyearbyen in about 6 hours. It's pretty clear that Longyearbyen lies in the heart of the Arctic, and almost equally evident that south-east England does not (you couldn't tell from the storm outside right now). So where exactly do I enter the Arctic proper?
That's a very good point, and one that deserves a special leaflet for you to have a look at. In this resource developed for the NZ YSC, I try to outline the main differences between the two global polar regions, and consider some of the things that make the Arctic unique. Personally, I think the biggest difference to Antarctica is the fact that the Arctic has been inhabited for so long. The survival of the Inuit civilizations, not just through 80 days of skiing in a Svalbardian spring but through millenia, is inspiration by itself.

Now that you have had some time to read the above-mentioned leaflet, consider the dynamics of the Arctic's boundaries. Defining the spatial area of the Arctic by temperature clearly makes this area change significantly, as is the case with almost all of the other boundary definitions. How tolerant are these boundaries to human influence?
Kim
Posted by globosapiens at 01:44