Every year during the Solfestuka celebrations, a sledge race takes place on Hiorthamn. This international event is prestigious due to both its long tradition (the sun has been coming back to Longyearbyen for a very long time) and the nature of the sledges that pummel down Hiorthamn’s slopes each year. 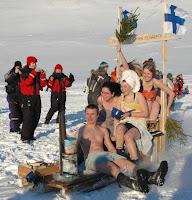 Both speed and style are judged by the organizers, with particular emphasis on “the crazier the better” (like the Finnish sauna-team). Even this year was no exception. Five sledges went down, all with a certain flair of their own. It isn’t surprising that three out of the five teams comprised UNIS students, including your very own Frozen Two (Ulli and Kim).

Their sledge was put together with help of Anne during the last few nights as part of the Frozen Five preparation. The beast, aptly named “Baby Bullet”, rocketed down the hill in less than 22 seconds. 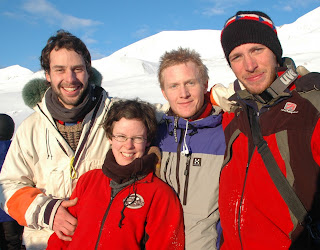 From known sources, this is a historic record, one that we hope to hold for a very long time! The metallic sledge, fearsome with teddybear Isolina and an old ice drill at its nose, weighted around 200 kg even before the four riders (steering lady Eeva, Swedish representative Albin and muscle power Ulli and Kim) jumped on. No wonder the crowd ran away when they saw us coming…

Greetings from the Far North! Kim & Ulli
Posted by FrozenFive at 17:34