This Sunday, the F5 team was reunited for the first time since the preparation trip ended in Grenoble almost 6 weeks ago. It was a somewhat strange reunion, since the mid-day arrival of the plane coincided with Lucas’ depot drop-off trip to Van Postbreen and my humble attempts to ski Trollsteinen using fjellski. In the end, we all met up in the local swimming pool, during the kayak-polo session. What a way to start and Arctic expedition!

Today, the full team (with the exception of Andrée, our four-legged companion) took part in the UNIS safety course run by the one and only “safety Fred”. After a brief re-introduction to various dangers of traveling and working in the Arctic, we went up to the rifle range above the airport to brush up on our rifle shooting skills. Ulli won the shooting competition almost without competition and secured himself the role as our armed protector, in case we run into bear-trouble. We all hope to avoid such situations but better to be safe than sorry. 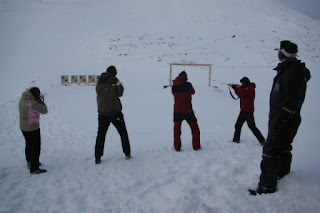 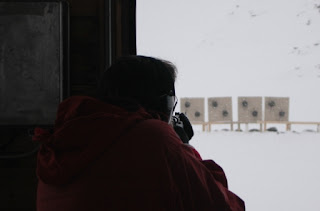 This afternoon, the various team members keep the ship rolling towards our near departure. Lucas is uploading the digital route information into the GPS units, Mats and Hella work on securing our stoves, Ulli is frantically organizing the rest and I laminated the maps and spent a few minutes admiring the view across Isfjorden towards Oscar II Land. In the evening, the team regroups for a 19:00 talk at the local Red Cross meeting. If you’re in the neighbourhood, see you there! If not, don’t worry and make sure to come to the UNIS lunch seminar on Wednesday, we promise you will not forget it (for a few days at least ;). Greetings from Longyearbyen,