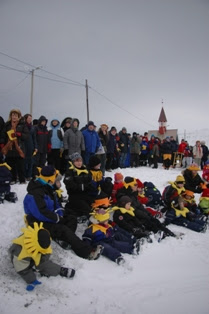 Today, at precisely 12:39, the sun would normally return to the city of Longyearbyen. After more than 4 months with the sun spinning its circles over the southern hemisphere, the citizens of Longyearbyen naturally congregated by the old kindergarten to await its appearance over the Sarkofagen ridge. Most of the people turned up, with the whole school (yes, there are kids up in the Arctic) turning up to sing, dance and look into the sky.
Unfortunately, today was pretty cloudy and no sun appeared, not even a hint of one. Better luck next year! It actually feels somewhat un-Arctic up here at present, with temperatures hovering around -3 degrees, but this may rapidly change.
In other news, I (Kim) have arrived in Longyearbyen yesterday almost precisely 3 weeks before we're setting off. During these last weeks, we'll be preparing daily rations from our food accumulated at Ulli's place. We also have to deliver some of the food depots, stocking them up with necessities such as toilet paper! Not forgetting the training as well, of course! 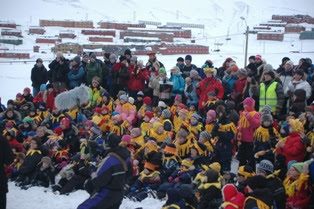 Arctic greetings from Kim
Posted by FrozenFive at 16:29

I hope the cotten anorak will work in such conditions ; )