A fullstop to a Master’s project 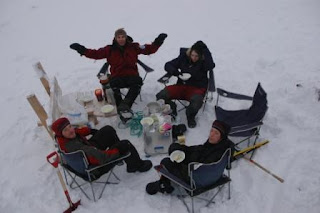 Yesterday, the 3 northern F5, with the help of UNIS-students Stephan and Anne, spent the afternoon relocating a house. A house with plenty of history. For a start, the Chalet d’Ulli used to be an Antarctic field cabin, traveling more than 4000 km across the southern ice behind a skidoo. Afterwards, it made the long journey to Svalbard, where it has seen limited use in projects until Ulli adopted it a couple of years ago.

The cabin served Ulli for 2 years as a base station for his Master’s project, a mass balance study of Bogerbreen, a picturesque glacier in Nordenskioldland. Over this time, the hut has probably experienced more things than a normal person experiences in a lifetime ;) Storms, plenty of reindeer and 7 people inside it at one time (plus a dog??). The first time I saw the hut, back in autumn 2005 during a 4-day field campaign with Ulli, it had grass roots (yes, some stuff grows up here) stuck in the chimney. It wasn’t until we realized that the hut had been blown 360 degrees along its long axis that this made any sense… 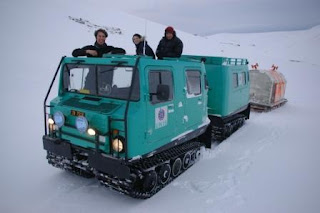 Back to yesterday. Getting the hut back to town proved easy enough thanks to the “beltebil” and the whole crew. It even fitted under the bridge in Longyearbyen! Far more special than the actual relocation was Ulli’s bright-green, probably radioactive but very tasty, cake with vanilla crème served just for the occasion. Not bad at all!

Kim
Posted by globosapiens at 16:43