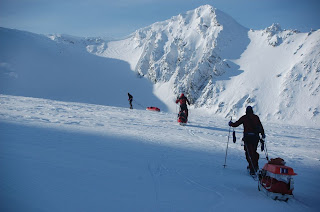 Hey, have you ever wondered about what I have and you don't? Which make me going skiing and writing this and you don't? Well, if you haven't you get the answer anyway. I'm forgetful, that's all.

I tend to forget what I learned from the last journey and this makes me go on another. Or in other words, I forgot how nice it was so I better do it again.
I also forget other things and there this seems to become superstitious.

On expeditions you try to select your gear carefully, just enough, but not too little. But I still want to get rid of something, my gloves for example. Down south I ski glass and Lucas turns around in front of me asking what this black thing is behind me. Dog shit, I answered, but I better check it. Two minutes later I got my glove back.

One week later: I just want to grab my hat since it is getting cold. No hat, but my pocket wide open. At least I remember having it an hour ago. Result? Andre and me go for a reconnaissance trip. After 2 hours we join the team. The hat was found in a good condition after being run over by a few skiers and pulkas.

Meanwhile I totally lost my gloves. There remain the right question to the glaciologist and archaeologist in a few centuries.
My camera fell out of my case resulting in another reconnaissance for Andre and me.

The best last week, lunch break. Usually this means I bring my lunch bag out of my right pocket from the jacket. Not this time. No jacket on either in the pulk. Again, good old Ulli remembered that he took a jacket on this trip. That leaves another 2 hour reconnaissance.

I like the travels where you can see things twice.
Posted by FrozenFive at 09:40