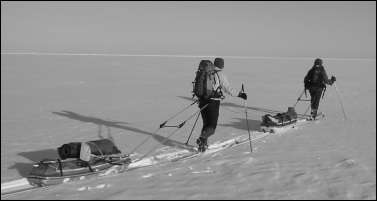 For two months in 2007, an expedition of 5 young European adventurers will attempt to cross the Arctic archipelago of Svalbard, located about 1000 km to the south of the North Pole. Kim, Hella, Lucas, Jirka and Mats, having already spent a year living in the heart of the Arctic as part of their studies, know what it takes to survive in the harsh climate of the high Arctic.

This expedition will start in March 2007 in Longyearbyen, one of only two sizeable settlements on this island of about 3000 inhabitants. First, we will begin skiing south across the ice-covered landscape, passing dangerous crevasses on the way to Sorkapp, the southernmost point of the island. At this stage, some 2-3 weeks into the trip, we will change direction and head north, along the polar bear-infested East Coast, to Verlegenhuken, an isolated promontory past 80°N. The final stage will be a race against the snowmelt, as we try to reach the abandoned mining town of Pyramiden and subsequently Longyearbyen. The distance covered will exceed 1000 km, with heavily loaded sledges and the Arctic weather slowing us down.

Apart from being a major sporting achievement, this expedition has both a human and a scientific side. The ability of people to exercise in such cold environments will be addressed through a medical collaboration with some of the world's leading researchers. Equipment testing for various companies will improve our knowledge of polar travel and the specialist equipment it entails. Various presentations are given by the multinational team members in their home towns to educate the public on the issues facing the Arctic. Even this remote wilderness is struggling to equilibrate to the changing climatic conditions of our world.
Hella, Kim, Lucas, Mats & Jirka
Posted by Lucas at 21:50